Where is the Dividing Line Between Marital Debt and Marital Misconduct? 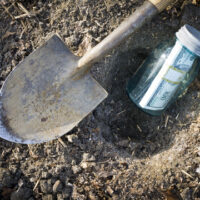 Debt has ruined the marriages of many couples, including some who had every intention of honoring their wedding vow to stay together for richer or for poorer.

Sometimes the constant stress of having to decide, on every payday, whether to pay for groceries or utilities, while the debts just keep getting bigger even as you make payments on them, is just too much, even for couples who are truly dedicated to each other.

Of course, taking on debt in open defiance of your spouse’s wishes is not a recipe for a healthy marriage, and judges in divorce cases hear about this problem all the time.

Even worse, borrowing money behind your spouse’s back, which personal finance experts sometimes refer to as “financial cheating” or “financial infidelity” is even worse, and if this happened in your marriage, its seriousness will not be lost on the judge in your divorce case. If debt ruined your marriage, a Central Florida divorce lawyer can help protect you from your ex-spouse’s debts following you around as you try to rebuild your life.

What Is The Difference Between Non-Marital and Marital Debts

An exception to this rule is that money that one spouse inherits or is awarded in a personal injury lawsuit is separate property. The money remains your separate property unless you treat it as marital property, such as by depositing it in the marital joint bank account or spending it on a house or other asset titled both in your name and in your spouse’s name.

Meanwhile, debts incurred during the marriage are almost always classified as marital debts unless you have a prenuptial agreement that says otherwise. For example, if your husband is a partner in a business, your prenup might say that his ownership interest in the business, as well as all debts associated with it, are his separate property. If both spouses had student loan debt going into the marriage, you might also specify in your prenup that if you divorce, neither spouse will be responsible for the other’s student debt. (Even when people sign prenuptial agreements to this effect, they often do contribute to paying down each other’s student loans as much as their finances allow.)

There is a general rule in the state of Florida for student loan debt that was not listed in a prenuptial agreement. That general rule is that any debt that was accumulated during the marriage is going to be equally divided. This is referred to as equitable distribution and applies to assets and debt. However, one issue that comes up very often is where one of the parties to the divorce has accumulated substantial student loans during the marriage, and the other spouse does not want to pay half of that debt.

Am I Responsible For My Spouse’s Student Loan Debt?

There is a common misconception both online and with some divorce attorneys that a student loan debt is treated differently than other marital debt.

Get Our Free Cheat Sheet: “How To Make Any Divorce Go Uncontested” Click Here!

This misconception states that because the spouse who did not go to school gets no benefit from the student loan debt, they are somehow not responsible for that debt.

It is well-settled law in Florida that student loan debt, even where the other spouse gets no benefit from it, is a marital debt.

This means that even if you do not leave the marriage with the benefit of the education, you are still responsible for half of that debt.

Are there any ways I can avoid responsibility for my spouse’s student loan debt?

The portion of the Florida statute that addresses the equitable distribution of debts does create some arguments for avoiding responsibility in certain limited circumstances.

There are certain factors that the court can take into consideration when looking at dividing debt. Your Orlando divorce attorney will be able to examine these factors with you in great detail.

One of these is the financial situation of the parties. This means that if you are the lesser earning spouse in a divorce and your spouse has substantial student loan debt and they are in a better financial position to pay for, then you can request that the court distribute more than half to them and a lower percentage to you.

Though this is an option, the court is not required to engage in this unequal distribution of liabilities.

It is advisable to consider a prenuptial agreement before you get married if your spouse is planning to further their education during the marriage.

Another consideration is the fact that even though you may be responsible for a portion of the student loan debt of your spouse they will likely be in a better earning position having had the education. This means that any alimony or child support that they would owe would be higher, which overtime may offset your out-of-pocket for the debt.

Marital Misconduct and its Effect On Debt In Divorce Cases

For many couples, the conflicts about spending and borrowing began many years before they filed for divorce. The default assumption in Florida is that it takes two to ruin a marriage; divorce is no one’s fault, and both parties should get their fair share of the marital property, no matter who was right or wrong about the issues that led to the divorce. If there was marital misconduct, though, the court might compensate the victim spouse for it by awarding him or her a greater share of the marital property.

Barry Mills, a serial entrepreneur, had already seen several business ventures come and go by the time he married his wife Brenda. Brenda was generally supportive of Barry’s career path and patient with the ups and downs of waiting for businesses to become profitable and cutting one’s losses if they failed to do so. When Barry and several business partners had the idea to found a startup bank in 2007, Barry asked Brenda to take out a $100,000 home equity loan on the marital home, so that he could complete his share of the startup funds. Brenda refused to sign for the loan, because she thought that the project was too risky. She did not want to risk losing their house if the project failed, as new business projects often do.

Barry forged Brenda’s signature on the loan application, took out the home equity loan, and went ahead with the project. The bank never opened because the state of Florida refused to grant it a charter when it applied for one, and Barry lost a total of $245,000 in the process. Needless to say, Barry was unable to repay the loan. Soon, Brenda got a phone call from a creditor threatening to take the house if she did not start making payments on the loan, which she had not known existed. That was the beginning of the end of Brenda and Barry’s marriage, which lasted more than three decades.

When their divorce went to trial, the judge classified the home equity loan as a marital debt and held Brenda responsible for repaying part of it. Brenda appealed the decision; in her appeal, she argued that Barry’s actions constituted marital misconduct, namely taking out the loan without her knowledge and even forging her signature on the application. The appeals court sided with her, agreeing that Barry’s actions counted as marital misconduct, and reclassified the loan as Barry’s separate debt.

What if You are Unable to Pay Half of The Marital Debt?

In cases where one spouse is the “breadwinner” and the other spouse is the “homemaker,” it is not uncommon for the lesser earning spouse not to have the financial ability to pay half of the debt that had added up during the marriage.

Luckily for these people, there are certain factors that the Courts may consider if your divorce lawyer has properly requested unequal distribution of the marital debt.

The specific factors that the Courts may use to assess and divide debt are as follows:

These points of consideration permit the lawyers and divorce Court judges to stick a person with more or less of the marital debt to you that to the other spouse based upon each person’s financial situation and based on their conduct as it relates to the debt over the two year period preceding the filing of the petition for dissolution of marriage.

It will be very important for you to make sure that your Orlando divorce lawyer has a solid understanding of how to properly plea for the proper relief in the petition of divorce or the counterclaim for divorce as it related to unequal division of assets. Your lawyer will also need to understand what types of evidence to gather during the case to present in court should the case not settle at mediation and need to go to a contested trial.

If you and your spouse disagree about how the court should divide your debts in your divorce, a divorce lawyer can help you. Contact Sean Smallwood in Orlando, Florida, for a consultation.

Resources:
Can I Set Aside a Divorce Settlement Agreement?
https://www.affordablefamilylawyer.com/equitable-distribution-in-divorce-florida-family-courts-aim-to-play-fair-even-when-estranged-spouses-do-not/
http://www.leg.state.fl.us/statutes/index.cfm?App_mode=Display_Statute&URL=0000-0099/0061/Sections/0061.075.html