What If I Need to Relocate With My Kids During My Divorce? 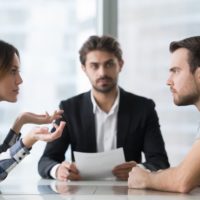 One of the most difficult issues that Orlando divorce lawyers and judges have to grapple with is whenever one of the parties to the divorce action needs to relocate a long distance away and desires to take the children with them.

This is because it is impossible for a divorce judge to award equal or substantial timesharing for the non-relocating parent.

These days, after a divorce where the parties plan to live in the same geographical area it is pretty easy for judges to award at, or near equal time sharing with the kids.

However, in situations where one of the parents move more than 50 miles away for longer than sixty days, this activates a special part of the Florida statute referred to as the relocation statute.

The relocation statute basically says that a parent intending to move more than 50 miles away for longer than 60 days must file a specialized type of petition called a petition to relocate with minor children.

The petition has several pieces of information that it absolutely must contain in order to survive a motion to dismiss. These include:

If someone is going to file for divorce and request a relocation simultaneously, then they would prepare a petition for dissolution of marriage and add a separate count for relocation. The separate count for relocation is still required to contain all of the specific information that I mentioned above and these requirements are not waived just because that party is also filing for divorce.

It is very important for people getting divorced in Orlando Florida to remember that there are completely separate provisions required for the petition to relocate than those required in a petition for divorce.

What sort of rules apply to the non-relocating parent?

Once the petition for relocation is prepared and filed a process server must deliver it personally to the non-relocating parent. This is known as perfecting personal service. Once service has been perfected, the non-relocating parent has 20 calendar days in which to prepare and file their verified objection to the relocation. The relocation statute also provides very strict rules for the way an objection must be structured.

The objection must include at a bare minimum the following:

Once the non-relocating parent completes their objection they must file it with the court within the 20-day deadline and serve a copy of it on the other parent’s divorce attorney.

One provision of the relocation statute that is extremely serious and must never be ignored is the portion that describes what happens if the non-relocating parent fails to file their objection within the 20-day deadline.

The statute specifically says that if a parent does not file their objection within 20 days of being served then the judge is to automatically assume that the relocation is in the child’s best interest and should grant the relocation without need for any additional hearings. This is scary for a lot of people especially anyone who thinks that they can take their time and save some money for a lawyer.

I have met several parents over the years who were served with a petition to relocate in their divorce case and made the incorrect assumption that they could take their time and save money for a lawyer only to find out that the judge granted the relocation without any input from them whatsoever.

The unfortunate truth is that when this happens it is extremely difficult if not impossible to go back and fix.

Up to this point, it probably sounds as though the parent seeking to relocate with the children has the deck stacked in their favor, however, the truth is that relocation with minor children can be a very difficult thing to have a judge award as long as the other party handles the case properly.

This is because the courts normally believe that it is always in a child’s best interest to spend as much time with each parent as possible. Therefore, in order for a judge to issue an order that would limit the parents to seeing the child a couple of times throughout the year, there would need to be a very compelling reason for the move.

What sort of factors will the judge consider when I request to relocate after my divorce?

The Florida relocation statute spells out some very specific factors that the divorce judge must you to consider whether or not to grant the relocation.

I will not be able to name all of them in this article; however, I am going to spell out some of the most important ones. These factors include

What if the relocation goes to trial?

In a trial on a relocation, your attorney for your divorce will need to craft questions for direct examination and cross-examination which highlight these factors.

What if I need to move after the divorce?

In a request for a modification, the Florida statute requires that the parents seeking the modification must show that a substantial, material and unforeseen change in circumstances has taken place.

The appellate courts have described the substantial change requirement for modification as an extraordinarily high burden to me. For this reason, modifications of custody arrangements after a divorce are not an easy thing to be able to adequately plea for.

In my experience, one of the biggest strategic helpers in a post-judgment relocation case is what the time sharing with the minor child was since the divorce took place.

What I mean is this, if the mom had 75% of the custody of the child after the divorce and Mom decides she wants to relocate she can usually reallocate the fathers 25% of the time sharing into a long-distance schedule utilizing the summer, spring break, and winter break.

A situation like this would be very bad news for the Dad who is objecting to the relocation. This is because if the judge can simply rearrange the father’s overnights in a way that ensures that he does not lose any time with the child that will make it a much easier decision for the judge to grant the relocation.

For this reason, it is extremely important that you never assume that you are able to agree to a lesser time-sharing schedule now and just modify it later since you now know that modifications are very difficult to obtain due to the requirement for substantial change as well as having a knowledge of the strategic disadvantage you would have in a future relocation case.