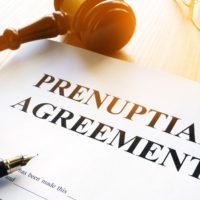 Magazines about weddings often contain articles about potentially contentious issues that couples should discuss early in their marriage, or even before taking their marriage vows.  Almost everyone, from magazine editors in the wedding industry to your long-married elderly aunt can agree that you can avoid many conflicts if you and your spouse can agree as early as possible on a game plan regarding issues, such as which holidays to spend with which relatives and what dollar amount qualifies a purchase as major enough to require discussing it with the other spouse before swiping the credit card.  No one will call you cynical if you agree before your wedding day that, in odd-numbered years, the couple will spend Thanksgiving with the husband’s parents and Christmas with the wife’s parents, and the other way around in even-numbered years.

MYTH: The Only Reason to Get a Prenup Is to Keep Your Spouse from Claiming Your Property

FACT: Prenuptial agreements are not just about keeping your assets separate, even though they do specify which assets belong to the couple jointly and which ones belong to just one spouse.  Some couples choose to sign a prenuptial agreement because they do not want one spouse to become liable for the other’s debt if the couple divorces.  In other words, if your fiancé is getting cold feet about marrying you because you borrowed tens of thousands of dollars to get a Ph.D. in art history or because you still have debts left over from your failed career as a professional poker player, a prenuptial agreement might help put his mind, or his parents’ minds, at ease. In more cynical terms, a prenup does not always mean that you are a gold digger; it could mean that you want to show that your spouse is not a chump.

MYTH: Prenuptial Agreements Only Matter If the Couple Divorces

MYTH: No Provision Is Too Crazy for a Prenuptial Agreement

FACT: Couples can specify almost anything in a prenuptial agreement.  They can include provisions about who gets certain pieces of property that do not seem valuable to anyone except the couple.  Some topics are off-limits for prenuptial agreements, though.  For example, a prenuptial agreement is not the place to make decisions about child custody and visitation or about the religious education of the couple’s children.  Likewise, if a court determines that a provision of the agreement, even if it is about property, is unconscionable, meaning that it is unfair, the court can refuse to enforce that provision.  Courts tend to reject prenuptial agreements that arrange for the spouse who had much less wealth before the marriage to leave the marriage with as little wealth as before the couple got married.  They see this as an abuse of power by the wealthier spouse, and it goes against Florida’s doctrine of equitable distribution.  Equitable distribution means that the courts divide the assets between the spouses according to what is fair.

Prenuptial agreements are for couples who have already thought seriously about potentially difficult financial decisions.  Contact Sean Smallwood, P.A. in Orlando, Florida for a consultation if you are thinking of signing a prenuptial agreement.