How Common Is Equal 50/50 Custody These Days 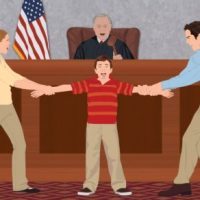 Do All Divorce Court Judges Award Equal 50/50 Custody These Days?

A decade ago divorcing parents fighting over custody of their children could expect that the mother would be awarded the majority of the time-sharing with the children with the Father spending every other weekend with the children. This was due in large part to the fact that judges in that era adhered largely to a way of thinking known as the tender years doctrine.

The tender years doctrine essentially stated that a child should spend the majority of their time with the mother until the age of four or above. This old way of thinking stood as an impenetrable wall to fathers who sought more time with their children after a divorce.

As time went on, more and more case studies, authored by physiological experts, began to surface showing that it was better for children to spend as much time with both parents as possible especially at early ages. This new emerging school of thought stood in stark contrast to the tender years doctrine and was quickly embraced by lawmakers and divorce judges.

Here in Florida, the statutory language that addressed child custody litigation began to take on a far more gender neutral and therapeutic appearance with changes such as doing away with the term “custody” and replacing it with “time-sharing”. Other big changes came when judges began interrupting the statute in a more gender-neutral way. An example of this is the statute’s language which gives a custody preference to parents who work to encourage the relationship between the child and the other parent and disfavoring any parent who is not likely to respect the other parent’s awarded time-sharing.

As these changes in thinking took root, parents and divorce lawyers began to see more awards of equal time-sharing to parents in family court cases and today in many cases it almost feels like all a father needs to do is to show up to court on time in order to receive an award of equal custody with their children.

This author has even heard such extreme stories such as a custody case that was brought by the father who was convicted of raping the mother which produced the child in question in the custody case. The story goes that the father served his time in prison for the rape and then petitioned for equal custody of the child of the rape ending with the father being awarded an equal 50/50 time-sharing schedule.

While I cannot verify that this story is 100% factual, it does highlight the fact that the courts are so intensely focused on making sure that children get as much time with both parents as possible that they are willing to overlook many of the types of allegations that two decades ago may have had a substantial impact on the case.

Of course judges will still pay close attention to safety concerns such as domestic violence or substance abuse, however, it seems like these days the courts pay more attention to logistical concerns, such as the distance between the parents’ homes and work schedules, than they do the safety allegations that often fly back and forth in divorce and child custody cases.