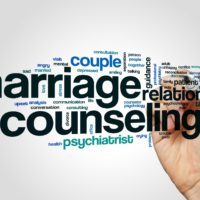 I don’t know about other divorce attorneys conduct business inside their offices, however, I can tell you that the vast majority of people who come and sit down with me for a divorce consultation are going to be asked if they have attempted marriage counseling and if they would be willing to attempt it before moving forward with their divorce.

A Divorce Attorney Who Sends Clients to Marriage Counseling?

One of my good friends has described me as “a walking contradiction” because I am a divorce attorney who attempts to convince his clients not to follow through with the divorce and to go to marriage counseling instead. Whenever I hear this I always laugh politely and am a good sport about the joke, but inside I feel like my friend is the one missing a very big point.

Almost every lawyer at one point in their life had a vision of going to law school so they could make the world a better place. Unfortunately, a few years in private practice has a way of beating that goal out of most attorneys. The only difference with me is that I held onto that idealistic goal and try to incorporate it in my divorce and family law practice every day.

The Odds of Reconciliation Are Much Better Than You Think

While researching for this article I read that some estimates say 10% of divorced couples end up remarried later down the road. Personally, I love that statistic and think it is a shame that those 10 % of divorced couples had to go through the long, expensive, and painful process of divorce to begin with.

The truth is that in many cases the odds of reconciliation are far better than most people allow themselves to think. The biggest barrier to most people having the ability to save their marriage is their own inability to acknowledge the role that they played in marital problems.

Want to Avoid A Trip to The Divorce Lawyer’s Office? Then Assume Some Responsibility

During my conversation with Mrs. Havens, I learned that one of the first steps that couples must take in successful marriage counseling is to be committed enough to the process to acknowledge the role that they have played in hurting their marriage.

Don’t go to marriage counseling in the hopes that the counselor is going to tell your spouse how wrong and bad they are and tell you how correct and mistreated you have been. If this is your expectation, then you may be in for a disappointment. This is because of the critical importance of each person in the relationship taking responsibility for the poor health of the marriage.

I think it is important to note that you do not have to be at the point to acknowledge your responsibility before you enter marriage counseling. A good counselor can help you get to that point, but you have to take the first step.

As a divorce attorney, I have met many individuals before they began the divorce process, walked with them through the process, and stayed in close contact with them after the process. I can tell you from experience that most people who decide to get divorced have absolutely no idea what sort of emotional, physical, and financial toll that process really includes.

Many people feel as though if they just cut it clean, they will meet someone else and everything will be sunshine and rainbows. The problem is that most people carry their same emotional baggage straight into the new relationship and are doomed to repeat the cycle all over again.

The question I posed to many of my clients is why not try to fix the marriage that you have now instead of risking having to start this whole process over again with somebody else later down the road.

Elizabeth Havens is a Licensed Marriage and Family Therapist in Orlando, FL and can be reached at havenscounseling.com