The Three Most Common Mistakes Made in Divorce Separations 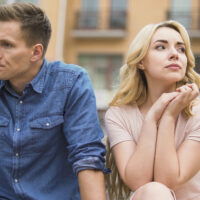 One of the most difficult parts of the divorce process in Florida is the actual separation. The process of transitioning from a single-family unit with one set of bills, bank accounts, and routines to separate households can be downright traumatic.

What can make matters even worse is when the parties to the divorce were living beyond their means and they find out midway through their separation that there is not enough income to support two households. This is where the old saying “people cannot afford to get divorced” comes from.

Mistake Number #1: Not Having An Exit Strategy

In most divorce, the relationship between the parties begins its downward descent long before anyone actually files for divorce.

Most of the time, people in this situation have spent a substantial amount of time strategically thinking through their exit strategy. However, in many cases, there is zero planning that goes into this part of the process which is a big mistake.

Divorcing people must consider whether they want to remain in the home, or if they will permit the other party to remain in the home. They also must think about how far away they will move if there are children involved in addition to what school zone their new residence is associated with and how that school compares to the other parent’s school zone. This can result in an unfavorable finding as to which residence the children’s school will be zoned for.

One scenario that can lead to heavy conflict in a divorce case is where both parties expect to remain in the home, and neither is willing to move out.

When this happens the level of tension and conflict can grow at an exponential rate and if there are children in the home they are usually exposed to a level of conflict and stress that should never be permitted. This does not even factor the higher likelihood that someone will be accused of domestic violence and an injunction will be filed which catapults the complexity and expense of a divorce case dramatically.

When things start to get tense one of the parties should make plans to move out in many cases. Luckily in Florida, a spouse who moves out of a marital home does not waive their ownership interests in the home or their claim to the marital portion of the equity in that home.

Mistake Number #2: Not Having A Financial Plan for The Divorce

This is extremely common in divorce these days and it is not really anyone’s fault for this lack of planning. This is because divorce is highly emotional, and I am a firm believer that when people are thinking with their emotions it is impossible for them to simultaneously be using logic.

The last thing you want to do is to find yourself in a situation where you realize that you don’t have the funding to properly address the need to get a new residence, set up all new household expenses, hire an attorney, and take on household bills alone that used to be shared with your partner.

People gearing up for divorce must sit down and write out an estimated budget that they will need to move out, secure their next residence, and keep their finances afloat through the divorce process which includes having funds to pay an attorney. For husbands, this will often need to include a monthly amount for voluntary child support or possibly voluntary spousal support payments to keep bills paid for both parties throughout the divorce process.

This is critical to do for any breadwinner spouse whose partner has been staying home and not working for a while. This is because you can bet your bottom dollar that the other spouse’s attorney is going to expect and demand that you continue to pay their household expenses throughout the divorce case. In fact, in many jurisdictions, there are administrative orders that require this to be done as an order of the court that is binding on the parties immediately upon filing for divorce.

Mistake Number Three: Moving Out Without Setting Up Timesharing with The Kids

Whether it is a text, email, or a handwritten note on a napkin that is signed by both parties I always recommend that when there are children involved you try to avoid moving out without having some sort of understanding between yourselves of what the timesharing for both parties is going to be during the divorce.

This is because it is extremely common for one parent to engage in withholding the children from the other parent throughout the process.

This leads to a lot of unnecessary conflict and attorney’s fees and many times could have been avoided if the parties had just spent five minutes talking about what the contact would be post-separation and putting it into some written format.

Though this is not an exhaustive list, these are three of the most common mistakes that we see people make during their separation.

There are many other pitfalls to look out for that an experienced divorce lawyer in Orlando Florida can assist you with. If you are going through a divorce in Orlando Florida, or any surrounding areas in central Florida call our office today for a confidential consultation.