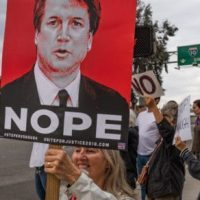 Recently, all the news channels and headlines in the United States have been filled with status updates and debates about the confirmation process for Brett Kavanaugh to the Supreme Court of the United States. As I listened to the testimony of Judge Kavanagh and his accuser Dr. Ford I could not help but think about how much this process mirrors the job that Orlando, FL divorce attorneys, and judges do every day across the United States.

Regardless of what side of the aisle the Senators presiding over the confirmation hearing sat on, none of them would ever be able to deny that this was a very difficult situation. When the dust settled and the smoke cleared some senators from both sides of the aisle were hailed as heroes championing their political parties’ best interests. However, divorce lawyers and judges receive little praise for the time they spend every day in the trenches litigating almost the same types of issues day in and day out. Granted, it is not every day that we are discussing who the next Supreme Court justice will be, but, they are trying to wade through a mire of allegations in order to figure out how to keep children safe. At the end of the day, this is every bit as important an endeavor as any other.

Typically, in contested divorce litigation allegations are made by one party to the case against the other that have very little evidence to corroborate them and Orlando family court judges are left with the enormous task of trying to figure out who is telling the truth and who is not.

During the media frenzy that surrounded the Kavanaugh confirmation process, one of the most common phrases that America heard from news media outlets was “uncorroborated allegations”. As frustrating and difficult to understand as this seemed in the Senate confirmation process, Divorce Court judges and attorneys in Orlando Florida have to deal with such allegations on a near constant basis.

Most often, these allegations come about in cases involving child custody issues. The allegations commonly revolve around a core of a few fundamental allegations consisting of domestic violence, substance abuse, alcoholism, and verbal or emotional abuse of the other parent or the children.

As was the case during Brett Kavanaugh’s confirmation process, the allegations of this type in divorce litigation often have little or no corroborating evidence to prove whether they are true or made up by one parent trying to get more time with the children in a divorce. Sometimes witnesses are brought in to testify who are close friends or family members of the parent making the allegations. This makes the job of the judge even more challenging because they must decide if the witness is being untruthful for their friend or family member’s benefit. An Orlando divorce lawyer would notice these similarities right away.

At the end of the Kavanaugh hearings, both sides stuck to their positions and the Senate was left to just go with their gut and to make a decision based on their instincts. A divorce court must do the very same thing when these types of allegations are made in litigation. As one can imagine, this removes all predictability from the outcome of the case and leaves the final decision to a judge who is a stranger. This is why it is always best to make every effort to settle all disputes in mediation without going to court if at all possible.