There are two basic directions that a divorce case can take: uncontested or contested. A contested divorce in Florida happens when couples don’t agree on one or more issues relating to the terms of the divorce. Lawyers and courts are involved to settle the dispute(s). 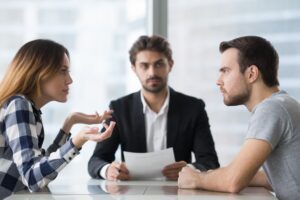 Just because a divorce is contested does not mean that there will be a nightmarish legal battle, but it does mean that there are issues that will take additional time and effort to work out with the other side.

Most divorce cases in Orlando, Florida begin as contested cases.

What Is The Legal Process That My Orlando Contested Divorce Attorney Will Take My Case Through?

Upon filing the petition, the clerk of court will issue a summons that will be provided to a process server who will then go and officially serve the petition documents on the respondent.

Once the respondent is served with the petition they will have 20 calendar days in which to file a formal response or an answer. In some cases, the respondent may, on the advice of their legal counsel for the divorce, file a motion to dismiss.

Once the respondent is served with the petition both parties will then have 45 calendar days in which to exchange mandatory financial discovery.

Typically, after the discovery is exchanged the parties will then begin to schedule mediation which is a court-mandated settlement conference where the contested divorce attorneys and their clients meet with the help of a Florida Supreme Court certified family and divorce mediator to attempt to work out a settlement.

The time period from the date of filing of the petition for dissolution of marriage up through the mediation date is possibly the most strategically important portion of the case and is where a good contested divorce lawyer in Orlando can implement strategic plans to put the case in the best possible position to settle at mediation.

Unfortunately, too many divorce litigants hoping to save money decide to represent themselves up through mediation telling themselves that if the case does not settle at divorce mediation then they will seek out an attorney. This is usually not a good idea because they lose out on valuable time in the case where a strategy could have been implemented but was not.

What Are The Most Common Issues That Contested Divorce Lawyers In Orlando Florida Deal With?

The most common issues that are contested in divorce cases in Orlando Florida include the following: child custody issues, alimony, dealing with the marital home, other property division issues, child support, division of marital debt, and more.

When child custody issues are the contested matter your Orlando contested divorce lawyer will need to examine several different facts as they prepare a negotiation and litigation strategy for your case. This will include each parent’s historical contribution to the parenting, any safety concerns, work schedules, driving distance to effectuate parenting plans, the age and maturity level of the children, and any special needs of the children.

It is very important to have all of these items well thought out before the contested case goes to the negotiating table because having evidence to counter the argument of the other side will be important at the mediation in order to negotiate a fair and equitable divorce settlement.

Where alimony is at issue the attorney dealing with contested divorce in Orlando Florida will need to consider facts including the standard of living that was established during the marriage, the age and health of both parties, the requesting spouses’ education and earning level, the payor spouse’s education and earning level, contributions to the marriage, and more.

These issues are most common when there was a moderate to long-term marriage where one spouse became the breadwinner and the other spouse sacrificed their career opportunities to stay home to either raise children or to manage the household.

If you are facing a contested divorce in Orlando Florida and call our office today for an in-depth no-obligation consultation: 407-574-5611

“Wanted a consultation to answer some questions I had. They were able to quickly schedule a call for the next day. Very honest, answered everything I needed, and gave me a game plan going forward.”